According to the City of Toronto our new Green Bins are as Raccoon proof as possible. Obviously they’ve never met our neighbourhood raccoons (genius IQ’s I guess).

After cleaning up our back porch a couple of times, I decided a quick trip to Home Depot was in order

Raccoons usually like to tip things over, this gives them more leverage as they pry on the latch or lid. So I mounted a couple of brackets on the porch railing to suspend the bin a couple of inches off the ground. The bin is not very heavy, but this seems to prevent the little rascals from tipping it over. 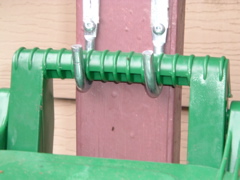 Next, I needed a way to prevent them from opening the bin as the built in latch proved to be little or no deterrent. My first attempt was to wrap a bungie cord around the bin holding the latch closed – this was not good enough however, and they defeated it easily. Something stronger was required. The picture below shows my final solution. 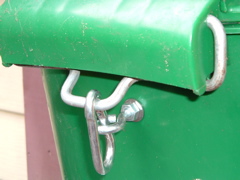 A 1/4″ eye bolt through the side of the bin, and a carabiner that clips through it and the existing latch makes it impossible for them to undo the latch and lift the lid, yet is still fairly easy to undo and open when filling. It has survived a couple of nights with a full load of decomposing goo, so I’m tentatively calling it a success.

Note: It is important to remember to unlatch the carabiner when putting the bin out for collection, otherwise its [stinky] contents will be left behind.