Usually the majority of your time is spent editing the content of the .wo bundle and adding logic to the .java file. But when you create a reusable WOComponent it is also important to specify it’s bindings requirements so that the WOLips Component Editor (or WOBuilder if you are so inclined) knows what bindings the component accepts. This is the job of the API file.

If you were to create a component named “MyReusableComponent” and in the API tab of the WOLips Component editor you added three bindings the editor window would look something like this: 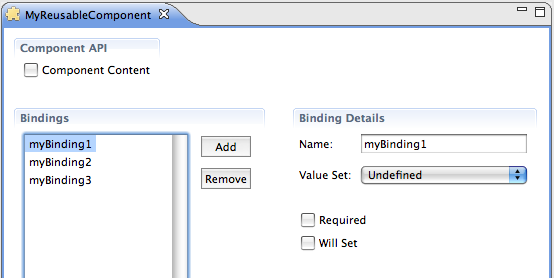 Now if you were to open the MyReusableComponent.api file in a text editor instead of the API editor you’d find a chunk of xml that looked like this:

Back in the API editor if you selected the first binding and checked the “Required” checkbox you’d see the API change to this:

The additional xml defines a validation message that will be triggered if it’s contents evaluate to true. In this case: if “myBinding1” is not bound.

Unfortunately, this is about as far as the validation rules currently go in the WOLips Component Editor. If you need validation that is any more complicated than “Required” or “Will Set” you are on your own…

Lets say our reusable component has an “action” and “href” binding. Either action or href needs to be bound but not both. Let’s start with the API xml that the Component Editor gives us:

I told the Component Editor to mark the “action” binding as being required to get the boilerplate validation message. Now lets extend the API to handle the “href” binding.

The validation message block supports <and> and <or> tags, so lets try with that:

If we test this by embedding our component in a page we’ll see that it works for one potential case. We get a validation warning if we neglect to bind “action” or “href”, however it fails to flag us if we bind both. So lets extend the validation rule to handle that case:

Alternately we could use the “count” directive and write our validation like this:

The easiest way to learn the different options available for the API validation rules is to browse some existing examples – ERExtensions from Project Wonder or WO’s JavaWOExtensions are two good places to start. Simply open the Framework/Resources folder and browse through the various component API files you find there.